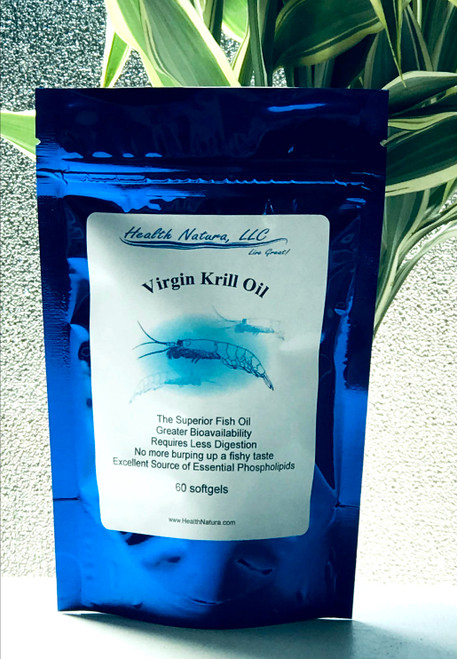 Krill oil, 60 caps 500mg per cap.
My recommended Omega 3 supplement for iodine therapy. Krill oil is our most popular “fish” oil. We also believe it is the best source of essential phospholipid bound EPA and DHA.

Our krill oil is free of detectable levels of PCBs, dioxins, pesticides, lead, mercury, arsenic and other heavy metals and contains no trans-fatty acids. Our krill oil is made from Euphausia superba (Antarctic Krill). Krill is one of the earth’s most abundant and sustainable organisms. Antarctic krill is the largest biomass on earth.

Phospholipid vs. Triglyceride Forms: Krill oil is a unique source of omega-3 fatty acids, choline, and astaxanthin. One thing that differentiates krill oil from other sources of omega-3 is that the fatty acids EPA and DHA are bound to phospholipids instead of triglycerides. This phospholipid form is structurally the same as our cell membranes. Moreover, these phospholipid forms are handled differently in the digestive tract. Phospholipids spontaneously form micelles, which can be transported easily in the aqueous environment. Phospholipids can be absorbed intact or in their lysophosphatidylcholine form. Triglycerides, on the other hand, are insoluble in an aqueous environment and require bile salts for their emulsification and absorption. While triglyceride forms of EPA and DHA remain valuable elements of supplemental nutrition, phospholipid based forms provide unique benefits that, when coupled with added choline and astaxanthin, render krill oil a novel nutrient complex with significant clinical benefits.

Care and Storage:
Use within 1 year of opening.
After opening, keep tightly sealed and store at room temperature in a dry location away from light.
Do not refrigerate after opening; doing so will increase the uptake of moisture and spoil this product. This product may be refrigerated if the original manufacturer's seal has not been broken.