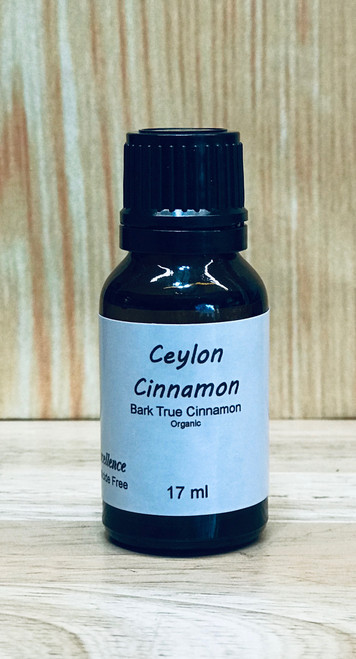 Organic Ceylon Cinnamon (cinnamomum zeylanicum) essential oil. A true Ceylon cinnamon essential oil that is organic. It has a very rich delectable aroma that is much different than cheaper species of cinnamon. Ceylon cinnamon is considered to be the true cinnamon.Ceylon cinnamon essential oil is a steam distilled organic cinnamon. The steam distillation carries over the lighter oils increasing its aromatic qualities allowing this oil to diffuse readily. While it still has a distinctive sweet note expected from Ceylon cinnamon the essential oil it is sharper in aroma and hotter than the powder or our Co2 Ceylon cinnamon extract. Co2 oils extract the complete oil yielding a heavier oil with a sweet rich aroma that doesn't diffuse well into the air but is not nearly as hot and harsh as the steam distilled oil. Co2 extractions are best suited for use in foods and topical applications.Packed in amber glass with dropper insert.After much searching for this often requested spice I finally found one that is truly rich and of the correct species. When you open this cinnamon you will be greeted with the distinct aroma of cinnamon with a sweet, sharp candy like note that is unique to the Ceylon Cinnamon species. I promise you won't be disappointed.You can also find this fine Ceylon cinnamon on this site as a Co2 extract and a powder.